Much like taking a drive for the sole purpose of getting lost, only to find your way once again as was often the case during outings as a child, my cooking has taken the same sort of philosophy.

“I have no idea what I’m doing.” – I have caught myself saying that more times than I can count over the past six weeks, and the results have been, surprisingly pleasant.

This couldn’t be any more clear, a demonstrated by my constant fiddling around with the default pancake recipe on the Bisquick Box. 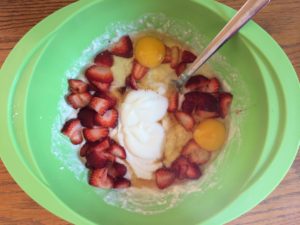 I often sigh exasperatedly and enunciate slowly to people, “if you can read… you can cook” in response to:, “yeah but I’m a terrible cook“.

Perhaps my admonishment should come with the disclaimer: “if you can follow directions, after you read them, then you’ll be a great cook!”

However, some rules are made to be bent or even broken, and strictly speaking, I never liked the general recipe on the pancake box.

Usually I bastardize the boxed instructions with fruit, yogurt, cinnamon, vanilla, citrus zest or any combination of ingredients which strikes my fancy.

Today, I tried the yogurt, cinnamon, vanilla and added a little bit too much liquid to the mixture.

Result: fabulous near, crepe perfection. At least to us anyway. 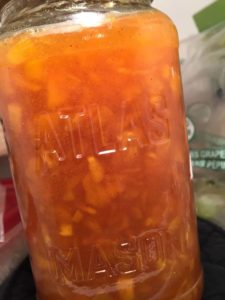 I rolled fresh, homemade peach preserves into these pseduo crepes and as it turns out, they were delicious. 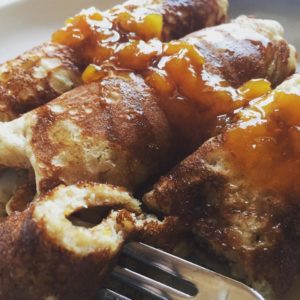 As far as cooking goes, I would not call this a “mistake” but a “happy little accident” – for which I’m grateful I made. After all, wouldn’t life be incredibly dull if we always followed the rules on the box?