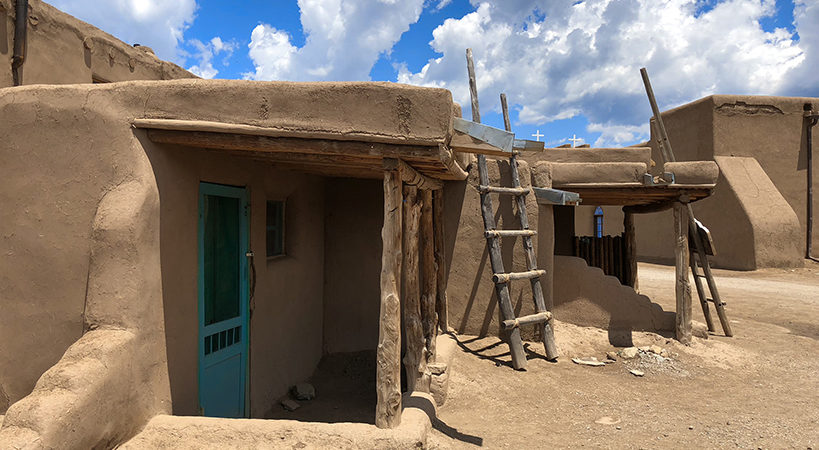 New Mexico is a very old place, relative to the rest of the United States. Santa Fe, the state capitol1, is the second oldest city in the United States by only 20 years (oldest is Saint Augustine, Fla.).

Long before New Mexico became a state (1912) or the capitol city founded by Spanish colonists (1610), lived the indigenous peoples of New Mexico.

History books will tell you that the first known residents of this state, were the Clovis culture followed by Ancestral Pueblo peoples.

Sometime after that, but before the Europeans descended upon the region, lived Puebloans or Pueblo peoples. There are currently 19 Pueblos that still inhabit New Mexico today2.

Taos Pueblo is one of those Pueblos, and they are gracious enough to open their pueblo to the public.

According to the Pueblo, the complex was built at some point between the years 1000 and 1450, and has been continuously inhabited since then. It is for these reasons (and more) that this landmark has been designated as a UNESCO World Heritage Site.

The proper name for the pueblo is: ȉałopháymųp’ȍhə́othə̀olbo (at the red willow canyon mouth).

I’ve lived in New Mexico for over ten years and have tried several times to go up to the pueblo to visit, and take a tour but each time I made the two-hour-plus drive from Albuquerque, the pueblo was closed. On this day however, a storm had just passed through the area, leaving brilliant, partly cloudy blue skies and rich, contrasting colors. Also – they were open!

My favorite part of this excursion was the colorful doorways and details of architectural woodwork. My eyes have a tendency to gravitate towards details and I noticed a lot of the little things that encapsulated the spirit of the entire place.